CL-PACK is committed to the manufacture and innovation of back-end automation, case erecting, packing, sealing, palletizing and other products.

What is a Plastic Continuous Band Sealer?

Continuous band sealer is a packaging product that contains plastic packaging and then seals the opening. It must not affect the quality and appearance of the packaged product. It has the functions of protection, sealing, moisture-proof and dust-proof.

There are many problems in the plastic continuous band sealer production industry, such as lack of product structure, poor quality performance, insufficient aesthetics, etc., leading to the phenomenon of importing the production equipment and technology of many companies. Due to the further development of my country's sensor technology, information technology, and computer technology, and plastic continuous band sealer manufacturers have been learning advanced foreign technology and constantly developing new equipment, domestic plastic packaging production technology has also begun to become an integration of electromechanics—trends in the development of globalization. 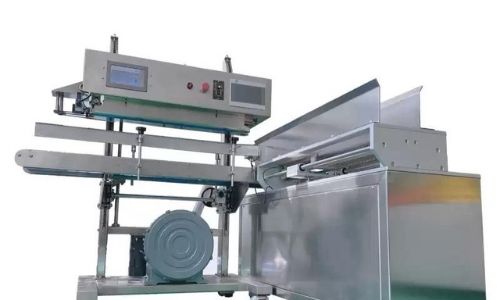 The automatic continuous band sealer for plastic packaging is specifically composed of the following ten:
1. Transmission belt. Controlled by motor servo system;
2. Seal the door. Realize the horizontal sealing of the plastic film, which is controlled by a moving motor;
3. Side sealing. Realize the completion of the lateral sealing of the plastic film, and use the motor servo system to drive the gear structure for control;
4. Film feeding rack. Fold the plastic film in half; the remaining material roller collects waste plastic raw materials and is controlled by the inverter; there is also the film feeding roller, which realizes the film supply, and is controlled by the inverter-driven motor;
5. The external conveyor belt is still controlled by the inverter-driven motor; the electric eye is installed above and on the side of the conveyor belt, mainly for monitoring the production process;
6. The console is composed of a human-machine interface (HMI), and the staff performs input, output and display operations;
7. The control cabinet is composed of electrical equipment such as relays, frequency converters, related components and controllers.

Build Continuous Band Sealer Module Library
SolidWorks inputs all the modules in the computer to construct the module library. In the process of designing new products, it is necessary to use the part code atlas to search to prevent the occurrence of multiple designs of existing parts so as to make the product. The standardization level, generalization and serialization of the company have been further improved.

We have divided and designed a large number of continuous band sealer functional modules. The main purpose of the module division is to realize the composition of different products through the selection and combination of modules so as to shorten the design and production cycle of the fully automatic plastic continuous band sealer and finally make the market better. The different needs of the company have been met.

(1) Based on the theoretical aspect of modular design, first analyze the structure and function of the product, and then divide the modules of the automatic plastic cup filling and sealing machine, and then recombine these modules.
(2) Combining parametric design technology with modular design, through the equation-driven parametric design method of Solid Works, based on parameterization, construct each module and the whole machine of automatic plastic cup filling continuous band sealer. The design efficiency is further improved.
(3) Through the COSMOS finite element analysis plug-in in Solid Works, the finite element analysis of the continuous band sealer's device module and the body module, and combining the results of the finite element analysis, formulate corresponding improvement measures, thereby reducing the related design costs, And shorten its development cycle.

Prev : How to Maintain and Maintain the Vacuum Packaging Machine?